The tragic story of the five O’Sullivan brothers 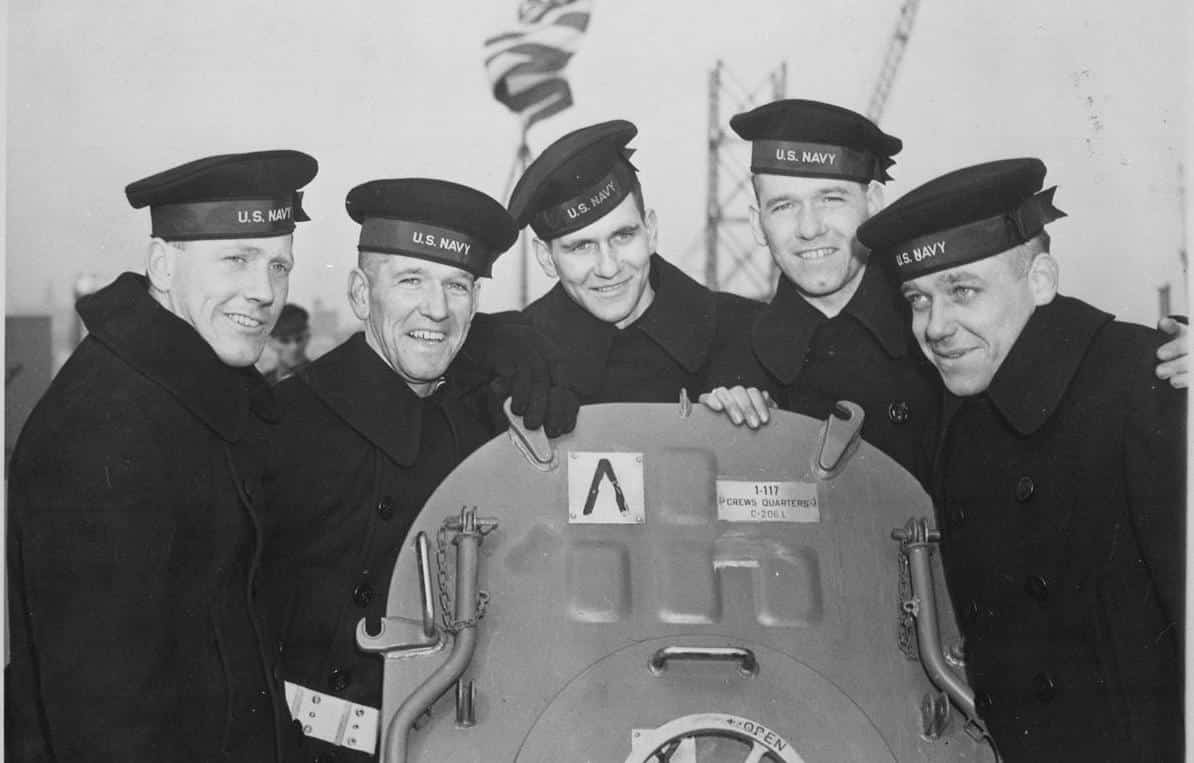 The five Sullivan brothers in Navi uniforms. The photo was taken on 14 February 1942 on board the Juneau at her commissioning in New York.

Today Peter Bernhardt tells the tragic and sad story of the five O’Sullivan brothers. In the family’s old home on the Beara Peninsula, a memorial plaque and a hiking trail commemorate the brothers who died in the South Pacific during the Second World War.

The Great F amine of 1845 to 1849 in Ireland is a trauma that still lingers deep in the Irish soul. In the autumn of 1845, a new type of potato blight appeared for the first time, causing shocking crop failures. One million people died of hunger and about two million left their homes in the hope of making a living in other parts of the world. The USA was the preferred destination.

A labour procurement measure by the British authorities was supposed to bring the Irish population into “work and bread” by finally pushing ahead with the construction of a proper road from Glengarriff through the Beara Peninsula during these years. But many Irish, young, strong and above all brave people set off for the New World. 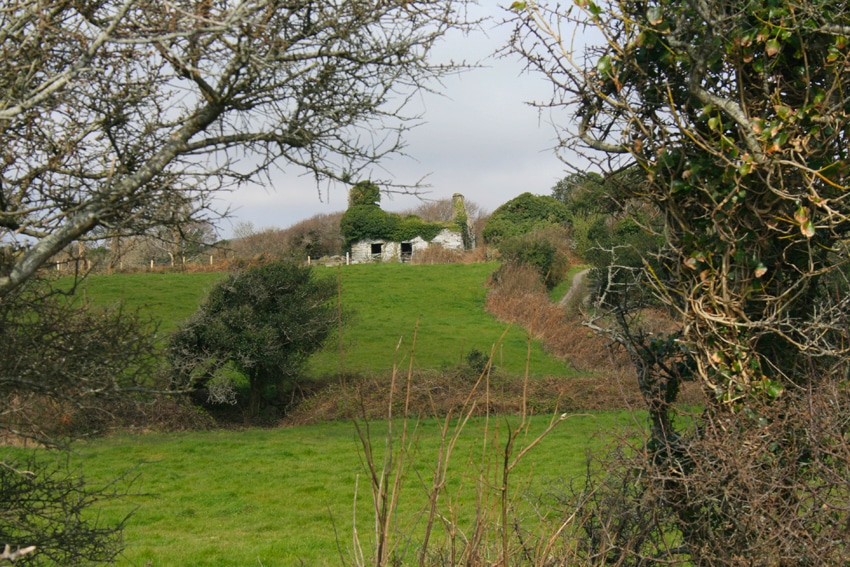 After more than 150 years, it is impossible to find out where the original cottage of the O’Sullivans stood. I asked some local residents in Trafrask and they all just shook their heads. The local postman just said, “Almost all the families here are named O’Sullivan.” And so I photographed a ruin in this townland. Could it be that the O’Sullivan family once lived here?

The young couple Tom and Bridget Agnes Sullivan, as well as Tom’s brother Owen, were among the migrants who left their townland Trafrask/Adrigole in 1849 for New York to start a new life far away from hunger and poverty. After registering at Ellis Island, they lived for some time in Oneida, New York State. Later they headed west, crossed the Mississippi and settled in Harpers Ferry in the new state of Iowa, which became a state in 1846.

Tom and Owen Sullivan were among the first settlers to build farms in or near Harpers Ferry. Through diligence and hard work, they quickly rose to become leaders in their community. Records show that they assisted in the construction of St. Joseph Catholic Church near their town in 1855.

The eldest son Tom was an adventurous lad who left home at the age of 16 to seek his fortune west of Montana. He didn’t stay there long, though, because he moved on to Colorado, where he worked in the silver mines for a while. With some savings, he then moved back to the vicinity of Harpers Ferry, where he found work with the Illinois Central Railroad.

On 10 February 1911, Tom Sullivan married Alleta May Abel, who gave birth to five sons and two daughters. One daughter, however, died of pneumonia in infancy. The two oldest of these Sullivan brothers, George Thomas and Francis Henry, known as Frank, joined the United States Navy in 1937. George was 27 years old and Frank 25.

The bombing of Pearl Harbor on 7 December 1941 by the Japanese resulted in the US entering the war. Genevieve’s boyfriend, the sister of the five brothers, was killed in the attack. This event was emotionally discussed in the Sullivan family and led to the other three brothers, Joe, 23, Matt, 22, and Albert, 19, also volunteering for the Navy on the ‘condition’ that they could serve together on the same ship. Their motto was: ‘We stick together’. And so it happened that all five brothers were ordered to serve on the warship “Juneau”. 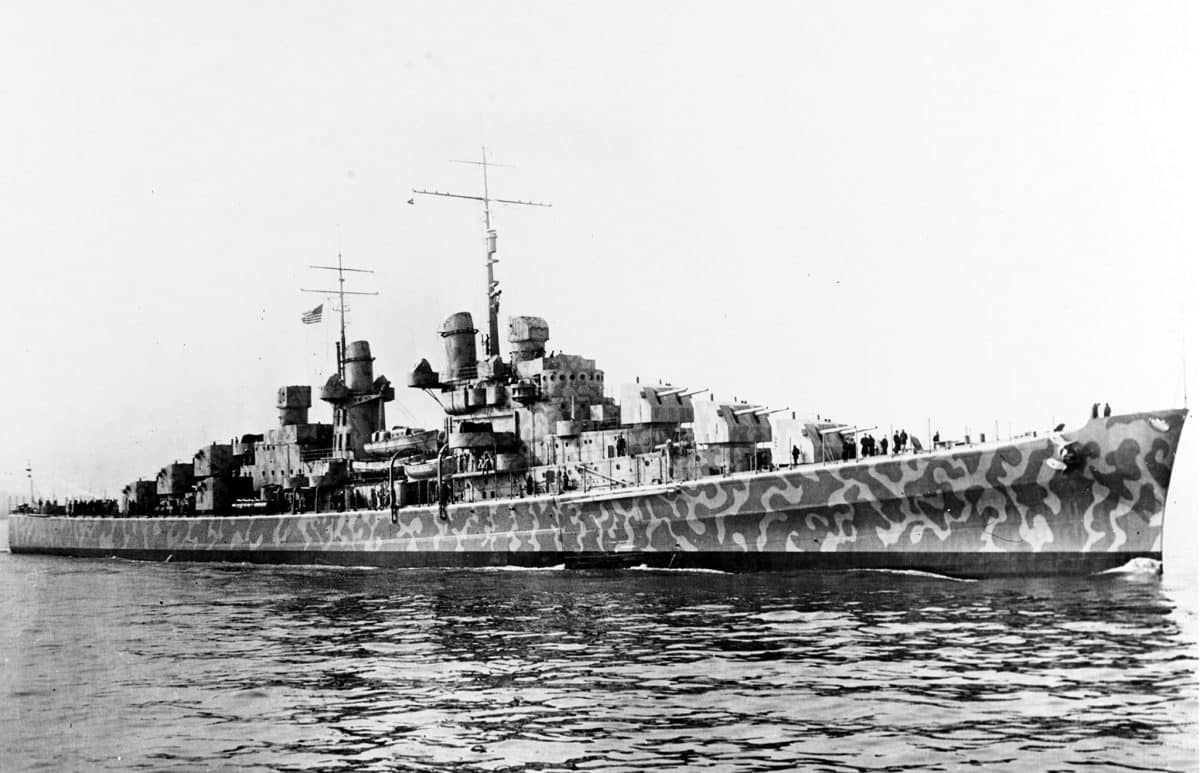 On the USS Juneau, the Sullivan brothers performed their war service together

On Friday, November 13, 1942, during the Battle of Guadalcanal near the Solomon Islands in the South Pacific, the USS Juneau was struck by the torpedo of a Japanese submarine, broke in two and sank in minutes. Four of the five Sullivan brothers and another 700 crew members went down with them. Because of the threat, the crews of the escort ships were not allowed to search for survivors. It was not until eight days later that 13 men could be rescued – among them the eldest son George. After the rescue, he occasionally took advantage of the darkness at night to take a bath near the boat. But one night he did not return to the boat from his swim. It is not known whether he died of exhaustion, his wounds or by a shark.

Left behind were his parents, his sister Genevieve and the wife of his youngest brother Albert with their son James. Albert was the only one who had married his Kathleen, and their son James was born in February 1941. James also later joined the navy. It is reported that one January morning in 1943, an officer came to the Sullivan home and reported, “I have some news for you about your boys.” “Who’s not coming home?” the father asked in mischievous foreboding “All five of them,” the officer replied.

The fate of the fallen Sullivan brothers shocked the nation. President Franklin D. Roosevelt wrote a letter to the parents expressing his “condolences and the gratitude of our country.” And the War Department instituted the so-called Sole Surviver Policy*. The sister of the five O’Sullivans, Genevieve, joined the WAVES** and worked for a recruiting office. Together with her parents she visited over 200 war factories and shipyards. The idea was to motivate workers to increase arms production in order to end the war more quickly. Father Thomas died a broken man in 1947. 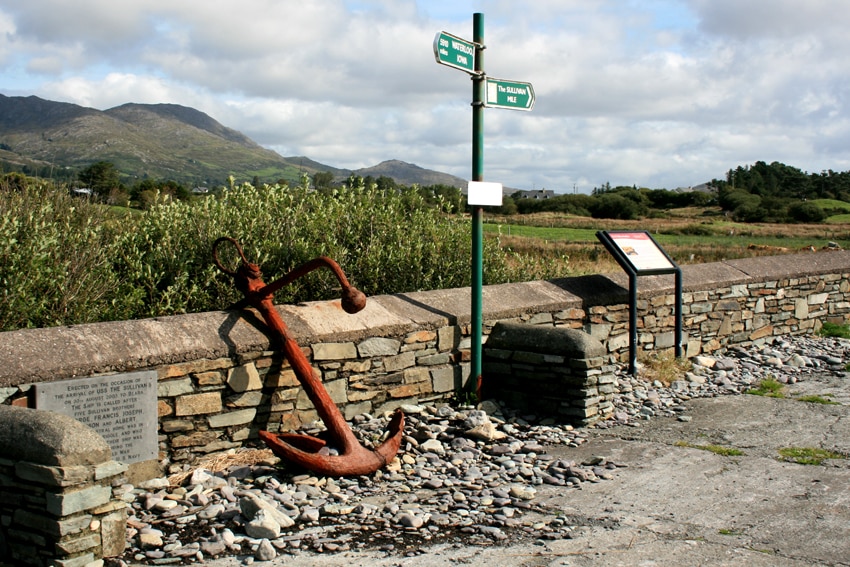 A pier in Adrigole became a memorial to the Sullivan brothers

In honour of the five fallen, the US Navy destroyer The Putman, which was under construction, was renamed The Sullivans on 10 February 1943 and christened by its mother Alleta Sullivan. It was decommissioned in 1965 and dedicated in 1977 as part of the Naval and Servicemen’s Park, Buffalo, New York State. At these ceremonies, James (son of Albert), his wife Sally and their two children John and Kelly Anne were guests of honour. 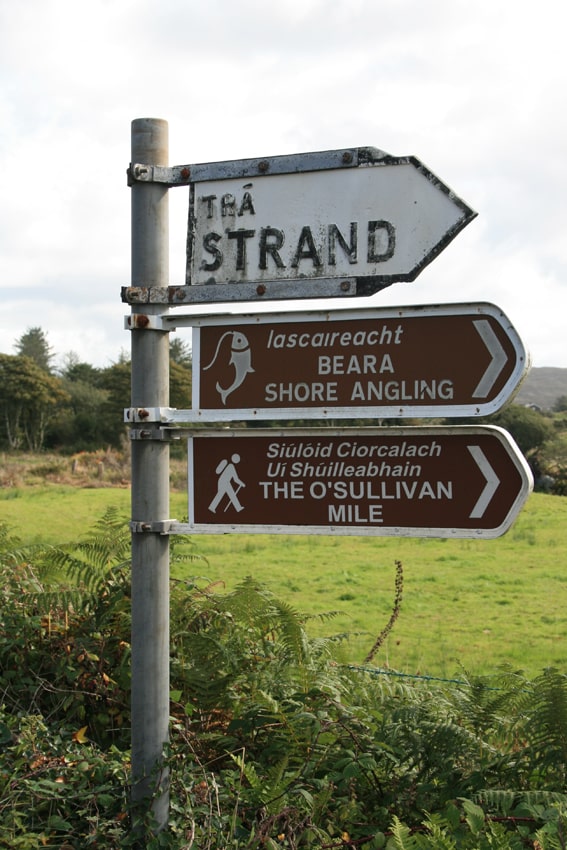 Signpost for the Sullivan Mile in Adrigole on the Beara Peninsula

Twenty years later, in 1997, another destroyer was also given the name of the Sullivans. The ship’s official motto was “We stick together!” On this occasion, Albert’s grandchildren John and Kelly Anne were present. This time, granddaughter Kelly Anne christened the destroyer. The Sullivans’ hometown, Waterloo, also took the opportunity to name a convention centre, a street and a park after the Sullivans.

The story of the Sullivans was made into a film in 1944 called The Fighting Sullivans. And the Hollywood film Saving Private Ryan was also inspired by the fate of the Sullivan and Niland brothers. In 1997, the rock band Caroline’s Spine released the Sullivan song in the album Monsoon. It is their greatest success and describes the grief of mother Aletta.

And the story is not over yet. It is a Saturday, 30 August 2003, when a large crowd gathered at Trafrask near Adrigole on the Beara Peninsula to honour the five Sullivan brothers whose grandparents left their homeland for the USA in 1849 to start a new life. Numerous ships and boats also anchored in the bay to attend the ceremony. But the special interest was in the destroyer USS The Sullivans, which had been specially launched. Officers and crew members also took part in the ceremony, and the two grandchildren Kelly Anne and John had arrived and, after a few speeches by politicians and clergy, unveiled a memorial plaque on “The O’Sullivan-Mile“, a small circular walkway created in honour of the five brothers. 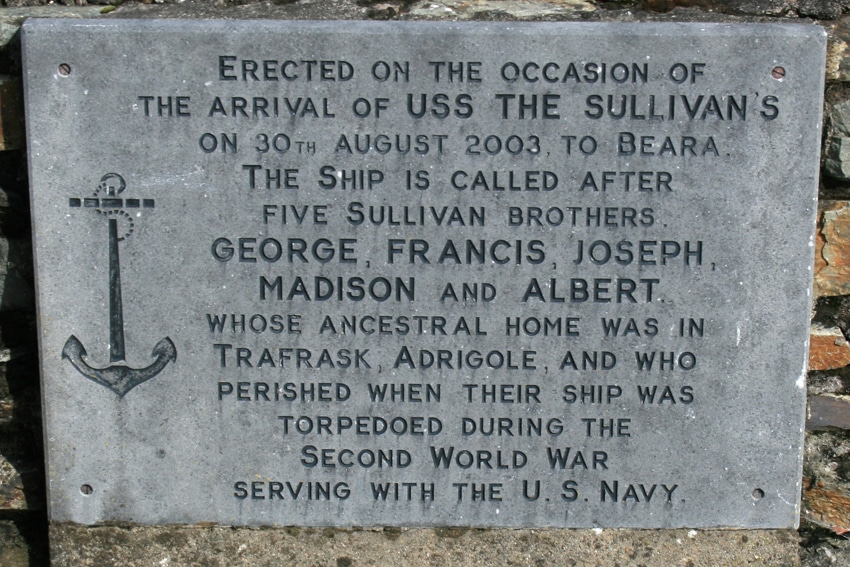 The plaque for the five Sullivan brothers in Adrigole

* The Sole Survivor Policy is a set of various regulations developed by the United States Armed Forces to protect the life of a military member who has already lost family members in combat operations or the like, and is thus the last survivor of a family, by withdrawing that person from areas where combat operations are taking place. (Source: Wikipedia)

** WAVES is the short name for the women who were accepted for voluntary emergency service in the United States Naval Forces, the US Navy, during World War II. The official name of this service was Women Accepted for Volunteer Emergency Service, abbreviated in common usage and also officially as WAVES (often WAVE in the singular). (Source: Wikipedia)

About the Author: Peter Bernhardt 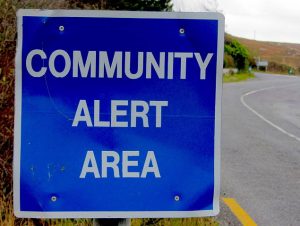